Since the Union’s inception, the members of the NBPA have, individually and collectively, utilized their platforms to advocate for and promote positive social change. The courage and commitment of our members – past and present – have provided a voice for and opened avenues towards the pursuit of justice for aggrieved and socially disenfranchised members of communities across this country and around the world.

Following the killings - within a matter of a few short months - of Ahmaud Arbery, Breonna Taylor and George Floyd, NBPA Executive Director Michele Roberts sent the following message to our members: 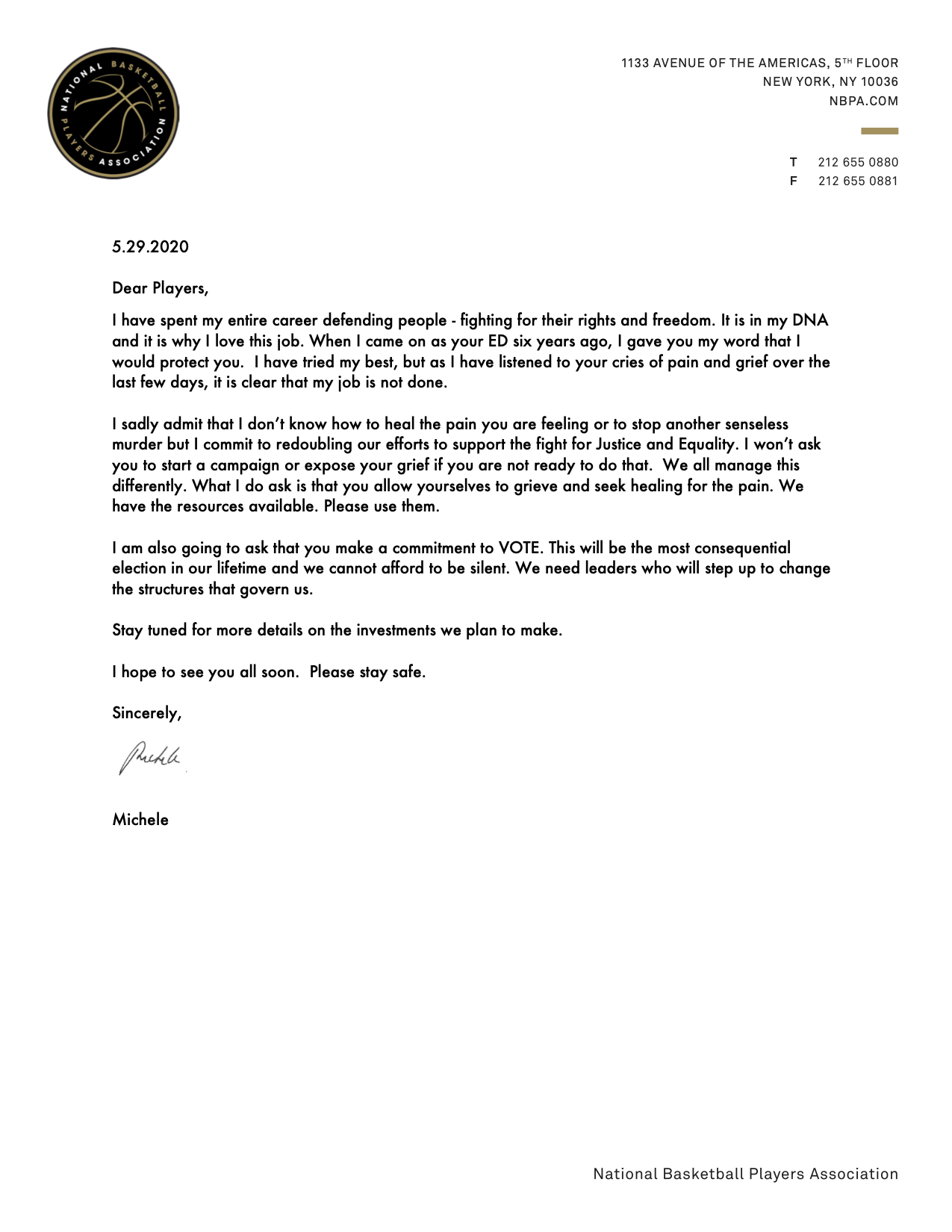 The key aspects of that message were: “. . ​change the structures that govern us. Stay tuned for more details on the investments we plan to make.”​

In the ensuing weeks, the NBPA watched and was inspired by the number of players organizing, protesting and challenging the long-ignored injustices resulting from systemic racism in general and police misconduct in particular. As we highlighted all of their great work on our platforms and provided tangible support for their efforts, the NBPA simultaneously worked to identify and target specific ways we could invest in changing the structures that govern us.

We have always supported civil rights organizations like the Legal Defense Fund, Chicago Votes, Bronx Defenders, Brooklyn Defenders, National Museum of African American History and Culture and more. The NBPA will deepen its commitment to social justice by increasing our support for similar organizations that are focused on ending police brutality, addressing voter suppression and supporting economic development. We will continue to match players’ philanthropic contributions and will work to develop a leadership education series to support player efforts to advance justice.

We are actively preparing and soliciting proposals regarding ways Players competing in the games in Orlando can effectively continue their advocacy on the national stage occasioned by the games.

Finally, the NBPA has and continues to be in discussion with the League and teams regarding actions our members urge be taken as well as prospective joint social justice engagements.

Current initiatives include, but are not limited, to the following:

We laud, encourage and will actively support current efforts to pass federal legislation designed to influence and deter misconduct among law enforcement personnel. However, we are mindful that policing is largely a local matter managed and reviewed by local mayors, police chiefs and prosecutors. Federal enforcement/investigations after the fact do little to pre-empt future misconduct. Rogue law enforcement officials persist in abusing communities of color largely because of their confidence - borne out by the historic failures of their respective jurisdictions - to document, investigate or prosecute those who abuse their authority.

The mission of the Police Accountability Project [“PAP”] is principally two-fold:

(2) Initiate and/or support community efforts to remove those local officials in those jurisdictions evidencing historical indifference to or affirmative protection of predatory police officers.

The NBPA will identify - or, if necessary, fund the creation of - an organization(s) capable of the creation and management of the data. Further, the NBPA will partner with and support organizations and community leaders who are working to measure and document the instances of police misconduct and are taking action to remove those officials which permit the perpetuation of police violence against people of color.

Civic engagement is a vital part of reform. To that end, last year we launched an initiative to increase voter registration and voter turnout among our members. Before the season was suspended, we had registered players on 9 teams. Those efforts will continue in Orlando this summer and become a permanent part of our player support efforts in the future. This sustained time with the players will also allow us to engage in more intense policy and ballot education.

The NBPA has always prioritized the importance of diversity. We proudly report that sixty five percent (65%) of us are of color and forty percent (40%) are women. The great work and superior service we provide to our members attests to the power of a team with diverse perspectives and experiences. Our commitment to diversity and inclusion also extends to our relationships with our vendors and business partners as reflected in the policies we have implemented and enforced. Those policies will be maintained and we will continue to invest in any training and support designed to further our adherence to the principles of inclusion.

Our for-profit arm, THINK450, was created because the 450 members of the NBPA understood their value and wanted to control the commercialization of their group licensing rights. They recognized their unique contribution to the cultural zeitgeist and how it could be used to influence consumer behavior.

We are proud to say that we have licensing partnerships across almost every business sector -- healthcare, tech, apparel and of course, gaming. Our partners understand that associating their goods and services with our members is good business.

As it’s been stated, diversity at every level is fundamental to our culture. The vast majority of our members are Black. As we strive to identify our role in addressing issues of systemic racism that go beyond police brutality, we believe we are uniquely positioned to engage our partners in constructive dialog about their workforce and board diversity. We believe they should also recognize the value of Black participation at every level of their organization.

In collaboration with our partners, THINK450 will design actions and solutions that enable our partners to infuse the values and principles of diversity, inclusion and equity into the core of their business.

Initially, we plan to engage with our partners in the following manner:

Step 1. Data - Review Diversity, Inclusion and Equity across all levels of the organization.
Step 2. Values - Meet with our partners to discuss the values of THINK450.
Step 3. Resource - Serve as a resource to our partners as they work to improve diversity across their organization.

We are here to protect, support and amplify our members and their voices. We remain committed to that mission as players continue to use their platforms to fight for justice in their local communities, across the country and around the world.

Our players have also expressed their emotions, opinions and are using their platforms as leaders to create change

Celtics’ Marcus Smart, Enes Kanter, and Vincent Poirier march in Boston protests: ‘Something has to change’

Ben Simmons shows support for March for our Lives protests

Udonis Haslem speaks up after Miami protests: ‘I want to be a part of the solution’

LeBron James and Other Stars Form a Voting Rights Group

The NBA Player Whose Family Marched With MLK